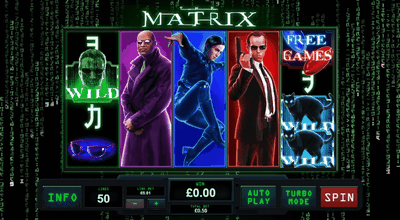 The Matrix online slot is a 5 reel, 50 payline slot from Playtech that is based on the 1999 science fiction film which became a worldwide hit. The slot version can be played from 50p to £500 per spin across desktop, mobile and tablet devices and comes with a 3 bonus features.
Visually, The Matrix looks fantastic – you will see the computer code, Matrix digital rain, as the backdrop. Featuring actual footage from the iconic film, symbols on the reels include 4 pieces of code, telephones, sunglasses and 3 characters from the film – Trinity (played by Carrie-Anne Moss), Morpheus (played by Laurence Fishburne) and Agent Smith (played by Hugo Weaving).

You also have a code style Neo (played by Keanu Reeves) who is the wild symbol and substitutes for all other symbols bar the Free Games scatter – it’s also the most lucrative symbol giving you 2, 6 or 10 times your stake for 3, 4 or 5 across a payline. There’s also a black cat wild symbol which only appears on reel 5 in the base and substitutes for all symbols except the scatter.

When the black cat wild covers reel 5 entirely, you will trigger the Déjà vu Shuffle feature – the wild reel then duplicates to reel 1 giving you 2 wild reels. The other symbols then shuffle to give you better winning combinations.

The main attraction are the 2 free spins features – these can be accessed by getting the Free Games scatter on reels 1, 3 and 5 in the base game.

Agent Smith Free Games feature – you are rewarded with 8 free spins with the Agent Smith symbols overwhelming the reels. Basically, more Agent Smith symbols are added to the reel strips on every free spin for bigger wins. Unfortunately, you cannot retrigger more free spins but you could win big seeing that the Agent Smith symbol is the most lucrative (bar the wild). Nebuchadnezzar Free Games feature – here you get unlimited free spins with the sentinel (killing robot) wild symbol swarming the reels. When a sentinel wild lands, it will lock in place for the duration of the feature. However, look out for the orb as this will remove all sticky wilds when it lands. The free spins continue until you have 6 wild symbols present on the reels at the same time.

The Matrix bonus was a very popular film and I’m sure the online slot will prove just as popular – graphically it looks superb with great animations. The bonus features are good and I’ve managed big wins of over 250 times my stake with the Déjà vu Shuffle feature in the base game.

When it comes to the 2 free spins features, I really liked the Nebuchadnezzar Free Games feature due to having plenty of sticky wilds on the reels – if you’re in luck, you could win very big here due to unlimited free spins. Variance wise, I found it to be medium with a nice balance to it throughout. If you like movie tie-ins, Playtech offers you plenty with Man of Steel, Top Gun, Ace Ventura Pet Detective and The Mummy recommended.