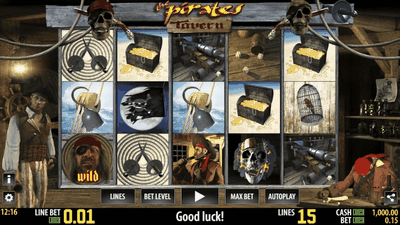 Pirate slots are amongst the many thematic variations of casino games online today. Play pirate slots either in real play or in casino fun mode straight from our extensive game list. Pirate booty is in a bounty with pirate games touting loads of gold features and many “X-marks-the-spots” on each and every slots treasure paytable map.
What are pirate-themed slots about?

Smart-ass answers aside, this particular sub-subgenre of slots games is the most predictable of ‘em all, really. The symbol set in any pirate-themed slot is certain to include the Jolly Roger flag (or at least some skull-and-crossbones symbol), treasure chests stuffed with gold, ships, cliché-spouting parrots and so forth.

Beyond the symbols, the backstory behind such slots almost always revolves around finding the botty and/or fighting to get more booty. While a slots game here and there actually puts the player in the position of fighting off pirates – the Barbary Pirates slot is one example – most of the time you’ll be playing Blackbeard or Bluebeard or Goldenbeard or whatevercolor-Beard.

Having said that, the truly nice thing about slots starring pirates is that these come in all formats: There are classic slots games, slots with video bonus rounds and a few other variations of the classic slot machine, all laden with swashbuckling buccaneers.

What are some good pirate slots?

There are quite a few, matey.
Pirates Tavern for its 1,000x jackpot payout win
Treasure Hunter, whose loot is expressed in infinitely re-triggerable free spins.

Classic slot game lovers will want to check out the three-reels slots Lucky Pirates and Jolly Rogers
Those up for something completely different will want to try the Pirates Dice instant win game. We weren’t aware that pirates played dice games, but this one’s fun enough so that we won’t cite historical inaccuracy here.

Weirdest of ‘em all is probably Ghost Pirates
Pirates of the Caribbean series of films – but only the bits with the ghost ship.
Walt Disney is gonna allow one of their franchises to be associated with gambling. Aside from the Avengers, that is.

Geez, only the seas of the 17th and 18th centuries had more colorful characters than today’s online pirate-themed slots. Just to name a few of the rogues you might meaet in online casinos, there’s Blackbeard, Black Bart, Cap’n Coins, Goldbeard and Captain Quid.

Where can I play pirate-themed slots games?

The good news is you don’t even have to leave port! Simply choose any of the great games from this page by clicking on the name or screenshot. You’ll be playing in seconds. Talking parrot and bottle of rum not included.