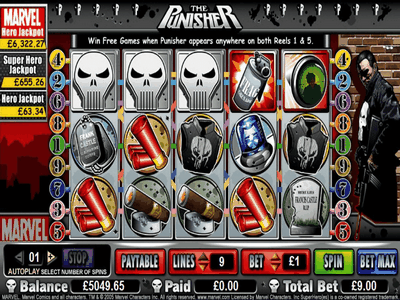 The Punisher mobile slot is not your usual story about a superhero that is out to do good. Instead, Marvel has created in it a revenge seeking vigilante, called The Punisher. It’s got a cool name and a dark atmosphere, with dark red and black being the usual colors that it relies on to transmit the mood he’s in. It’s a game that Cryptologic developed under license from Marvel, and it’s one of my favorites so far. If you think that an excessive amount of violence can be fun, then The Punisher is the comic book (and slot) for you.
Your wagers in this game will be placed on the 9 paylines available on its 5 reels, with your main hope being with the ,000 top jackpot, followed by one of the Marvel progressives that are offered inside. Free games, multipliers, bonus features, scatters and wilds are all present in the game, and they make it even more fun than what the excessive amount of violence used in it could.

Features of The Punisher

Just in case the graphics and the violent superhero wasn’t enough to get you interested, they’ve also placed all the bonus features, free spins, wilds, multipliers and scatters that you could want from a game like this.

The Punisher, and his trusty shotgun, is all over the wild symbol. You’re not going to be surprised by anything that this symbol can do for you, but you will be satisfied with its powers. First of all, whenever you see a wild symbol you know that you’ve already won something. Even a single wild that appears in the game will get you 2 coins, while additional icons of this type on the same payline make the prize go even higher, up to 5,000 coins. Second, this is a wild, so expect it to behave like one. It can be the substitute for a symbol that is missing, if that action will result in a winning combo appearing.

The scatter can be just as important, with the Punisher Logo on it, which means a skull basically, and even he looks angry. Though this is a scatter symbol, so it shouldn’t matter in what position it appears, the developers saw fit to only award its bonus feature and payouts when it shows up starting from the left and in consecutive order. You’re not going to get as much out of this feature as you would in other games. If you do get them in the right order, the scatters will give you up to 100 times the wager of that spin.

With three or more Punisher Logos appearing from the left to the right, the Villain Hunt bonus feature starts and you are asked to select five of the 12 windows of a building. With each selected window, you get either 10 free spins or a villain. You can win up to 200x the bet and the free spins all have 2x multipliers.

It might not be that easy to trigger this bonus feature, since the scatters don’t work as they’re supposed to, but the rewards can be huge when you do get it.

Another way to get free spins in The Punisher slot is through the wild symbol, when you get him on both the 1st and 5th reels. Your reward consists in 10 free spins, with 2x multipliers making sure that all prizes are worth twice as much to you. This is a feature that can be retriggered.

Considering the number of jackpots and the big prize offered inside, being required to place a bet per spin is not that bad. If you do that, you use the 9 coins to activate all 9 paylines, and in each case you place a wager per line. If the budget is not high enough to allow you that bet, the coins can be dropped to .

Depending on the coin you went with in your bets, the 5,000 coins of the jackpot could be worth up to ,000. Besides the payouts offered inside the game, there are also the three progressive jackpots from Marvel, which are given at random to players that are using Marvel games.

The design of The Punisher is somewhat dark, but that fits with the violent nature of the game perfectly. The background picture for example, gives you The Punisher on one side, leaning against a brick wall in the shadows, holding a rifle. The other side gives you the city at night, with the red skies being rather ominous. With plenty of skulls, bullets, dark clothes, villains and weapons among its symbols, the game feels exactly as it should be. If you enjoy it, I suggest you give the comic book a chance as well, it’s even better.

If the thought of a dark and violent slot machine sounds good to you, The Punisher is the game to play. I’m sure it will have a lot of fans, I for one love it already. Even the features are good enough, the payout being the one I hope they keep working on.

The Punisher, the Comic Book

Punisher is what you would call an antihero, someone that you’re not really supposed to look up to, a guy that’s out for revenge and he kicks a lot of villain behinds in the process. He is part of one of the comic books that Marvel has released, his first appearance being in 1974, in a Spider-Man issue. His motivation is the death of his children and wife, for which he seeks revenge and he fights criminals, in any way he sees fit. He is a vigilante, pure and simple, a guy that doesn’t let morals stop him from taking care of business. From murder, to torture, extortion, kidnapping or simple violence, he uses it all and he doesn’t give it a second thought.

The name of the guy behind the Punisher is Frank Castle, a US army veteran that has all the skills needed to use conventional weapons of all kinds. Part of the special forces, he is an expert when it comes to guerrilla war, stealth tactics, martial arts and using pretty much any weapon.

The Punisher can be found at any Cryptologic casino, where you get a chance to play it for real money or in free mode.