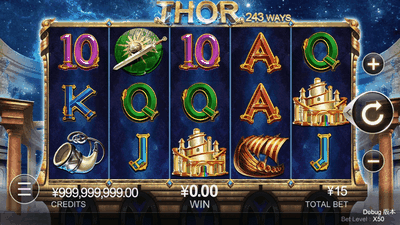 From gaming software developer Playtech’s catalog of Marvel Comic themed slot games comes Thor. Thor wields a big hammer and comes from another world as he attempts to lead the player on a quest for the big Marvel Mystery progressive jackpot. This particular game is modeled after the 2011 movie featuring Chris Hemsworth. As is the case with many of Playtech’s other Marvel slot games, Thor comes with a very nice variety of bonus games wrapped up in truly amazing graphics, a space-age audio soundtrack and cutting edge video features. Also, the background motif is dead on representation of Thor’s home planet Asgard.

Thor uses a fairly common game format of five reels and 30 pay lines. As is the case with most of the Marvel games, this one is ideally suited for novice players due to the betting limits, which stand at $. The low-paying symbols are represented by playing card numbers 10-A plus characters from the movie, including Odin and Loki. The wild symbol is represented by Thor. It comes stacked on reels two and four and as a solo symbol on the other reels. It replaces everything but the scatter symbol (Thor hammer) and the bonus symbols (Mjolnir & Jotunheim). The game is rated as a medium variance with average at best payouts with the exception of the progressive jackpot.

At first glance, Thor mobile slot seems to offer as many as seven different bonus games. In fact, all of the offerings are nothing more than different Free Game variations with different game-playing characteristics.

Thunderstorm Re-Spin Feature – If stacked wilds appear covering all of reel two, the player gets a re-spin with the wilds locked in place.

Lightning Free Spin Feature – If stacked wilds appear covering all of reel four, the player gets one free spin with 2-5 additional wilds added to the reels.

Rainbow Bridge Feature If Mjolnir appears stacked on reel three, the player has to choose one of two orbs. One selection leads to Earth Free Games and the other to Jotunheim Free Games or back to the main game at Asgard. In both of these free game environments, the playing receives free spins with extra wilds, special symbols and multipliers.

Marvel Mystery Progressive Jackpot Feature – Participants for the progressive jackpot game are chosen at random. The chosen player has to match three spots from a 20 spot matrix to determine which jackpot they win. The four possibilities are the Power jackpot, Extra Power Jackpot, Super Power Jackpot and the Ultimate power Jackpot.

Summary: – When all is said and done, this is a pretty nice slot game. With all the different free game possibilities, the player need to stay on their toes or risk getting lost in the action. Payouts are a little lacking, but the game belongs on everyone’s short list.