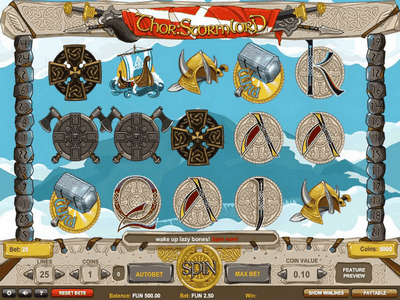 Plenty of effort has obviously been put into the design of Thor: Stormlord which looks and sound terrific – set against a cloud-filled sky, even the lower value playing card symbols, which are backed by Viking shields, look excellent. They’re joined by a shield and axes, a Norse cross, a Viking longship and a warrior’s helmet. The helmet is the most lucrative standard symbol, awarding up to 400 coins.
Mjolnir, Thor’s mighty hammer, is the wild in the base game – when it lands, it can smash the symbol directly to its right and in the process, create a tumble which will add a high value symbol in its place. A payout is then made with the new symbol in place.

Thor: Stormlord comes with a pair of bonus features. Land 3 of the Bonus symbol anywhere on the reels and you’ll trigger the Bonus feature. If you land 3, 4 or 5 on a single payline you’ll also win 200, 300 or 500 coins as well as activating the feature. You’ll then be presented with a selection of 5 urns – pick to reveal instant coin bonuses.

Land 3 or more scatters anywhere on the reels triggers the Free Spins feature. Just like the bonus, if they line up left to right on the same payline you’ll win a cash prize of 45, 200 or 450 coins plus the free spins. Look out too for the extra wild that’s on view during the feature – whenever it forms part of a winning combination, that payout is boosted by a 2x multiplier and doubled.

We found plenty to like in Thor: Stormlord – first and foremost, it’s a beautifully designed slot. The graphics are fantastic, backed by a beautifully haunting soundtrack. The features deliver plenty of action too. Thor’s hammer hits regularly in the base game and the pick ’em and free spins rounds come along relatively often.

With its cracking imagery and excellent gameplay, this Norse themed slot is a real all-rounder. If you like your slots to come with plenty of Epic adventure, then Thor: Stormlord is definitely a slot to investigate. I also recommend you play Thor The Mighty Avenger by Playtech which is based on the official blockbuster movie.