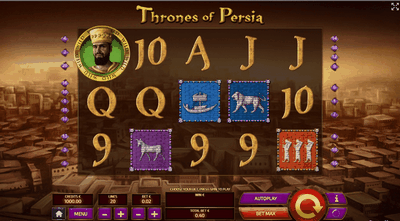 Better known as Cyrus the Great, Cyrus II of Persia was the founder of the Achaemenid Empire, the first Persian Empire. Under his rule the empire stretched from the Mediterranean Sea and Hellespont in the west to the Indus River in the east, making it the biggest the world had yet seen. His successors further increased the empire’s territory, until it stretched from parts of the Balkans and Eastern Europe in the West to the Indus Valley in the East. Cyrus the Great’s reign lasted for around 30 years, having led multiple campaigns describes as having brought “into subjugation every nation without exception.

Tom Horn Gaming finds inspiration in this great figure from antiquity in Thrones of Persia, a slot based around the Achaemenid Empire at its height. The emperor himself appears as the wild, able to substitute all symbols except that one great example of Persian architecture, the ziggurat. This is the scatter, which triggers the free spins. But before these start you get a chance at the Ziggurat of Babylon bonus round, which can earn you awards such as more free spins and multipliers. But now let us delve further into Thrones of Persia and learn what it is all about!

Thrones of Persia is a 5-reel, 3-row slot with a total of 20 paylines, formed by landing 3 or more matching symbols on adjacent reels. There are 11 paying symbols on the reels, with the 5 high pays being based on art found on the walls of ancient Babylon. These are the soldiers, ship, chariot, lion and unicorn. The low pays, on the other hand, are the familiar A, K, Q, J, 10 and 9 card royals. The emperor Cyrus the Great is the wild, able to substitute for all symbols in a payline except the ziggurat scatter. Land 3 or more of these anywhere on the reels to earn 5 free spins, as well as a round of the Ziggurat of Babylon.

Landing 3 or more scatters earns you 5 free spins, but before these kick off you first get to play the Ziggurat of Babylon bonus round. This has you pick stones from a pyramid, starting from the bottom row, and lets you increase both your free spins and included multiplier. Going up a row increases the value of the prizes available. Once the Ziggurat of Babylon round is over you start the free spins proper, which include an extra wild featuring Cyrus the Great on his throne. Any payline with an extra wild brings double the payout, with exception of the highest paying payline consisting of 5 wilds.

Thrones of Persia Graphics and Sound

Thrones of Persia evokes the ancient world through both its visuals and sound. The transparent reels are set in front of a painted backdrop of the city of Babylon as it once was, back during the reign of Cyrus the Great, when it was the capital of a great empire. On these reels are simply yet effectively designed symbols, particularly when it comes to the high pays. After all, these are based on murals found in the historical Babylon. As you spin the reels you will also listen to a flute-based tune perfect for this kind of game.

While aimed primarily at lovers of historical slots, Thrones of Persia should entertain any player through its solid win potential, particularly during the free spins round. In addition, it is also a generally great looking and sounding slot.