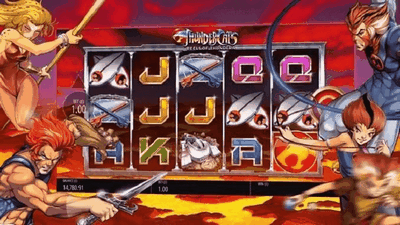 Online casino developer, Blueprint Gaming, have certainly earned a name for themselves for successful branded online slots. Viz, based on the cult British comic, Top Cat, and – best of all – Worms Reloaded have all taken hit comics, cartoons and video games and turned them into great online gambling titles.
Joining the pile in 2017 is the Thundercats slot review, a new title from the developer that brings back a thousand ’80s retro memories. In terms of gameplay, though, the online slot is anything but retro. It’s packed with exciting bonus features and slick 3D graphics. Let’s grab our trusty sword and take on Mumm-ra.

If you know your 1980s cartoons, you must remember ThunderCats. One of a host of US/Japanese co-productions, Ted Wolf’s ThunderCats featured a gang of alien big cat heroes as they took on the evil villain Mumm-ra, a sort of annoyed-looking Egyptian Mummy.

Our feline hero friends are presented here in graphic novel form. That means the beautiful animation just got a little more eye-catching. In basic gameplay, ThunderCats is played on a 4×5 set of reels. There are 40 paylines to aim for, with coins starting at just 0.

To start off with, a random character will be assigned to the reels. If your special symbol appears on Reel 5 you can choose to activate it or spin a wheel and select another.

Lion-O: The ThunderCats’ leader will have his Sword of Omens expand on Reel 3, triggering random Wilds. Tygra: Any Wilds that appear will transform into a stacked mystery symbol. Cheetara: A special Wild symbol on Reel 1 will result in added Wilds that expand to fill the reels. Panthro: Reels will expand at random and link to special super-stacked symbols. Wily Cat: You’ll win two stacked Wild symbols on a spin with this final ThunderCat. There’s a 2x multiplier attached as well. During a character round, the ThunderCats cheeky pet, Snarf, can appear. He will turn a losing spin into a win or improve one of your modifiers.

There are nine regular symbols in the ThunderCats online slot. The royal symbols – J, Q, K and A – pay from 5-80 coins for 3-5 matching symbols. Next come the surfboards and ThunderCats tank which can both pay up to 100 coins. The ThunderCats’ weapons pay a top jackpot of 200 coins for 5OAK.

The ThunderCats logo is the best payer, dishing out 400 coins for 5OAK. It can also appear stacked. The Wild Panthro symbol also pays out 400 coins as a jackpot and will substitute for all regular symbols.

Look out too for Thunder Reels. This can activate at random on any spin. If it happens, the reels will expand upwards to display up to eight rows.

If the player lands three or more ThunderCats logos anywhere, they will trigger the Thunder Bonus game. First, spin the Thunder Wheel to determine your free spins. You can also gamble the bonus up to achieve the next level.

There are five free spins rounds: Ultimate Thunder spins features Stacked Wild symbols on an 8-row set-up, while Mumm-Ra free spins features 10 games where Wilds can be “saved up” to be placed back on the reels.

Finally, our last baddie comes in the form of Jackalman. This fearsome creep is in charge of 10 free spins with multipliers (10x on any Wild that appears). As with Slithe and Monkian, gamblers can earn an extra 5 free spins during the feature.

OK, so first the good news about ThunderCats: the graphics and gameplay are pretty slick. The range of free spins bonuses is pretty useful too, if you can trigger any of them. We found most of our good real cash prizes coming from the random expanding reels. But even then the wins were more in the 2-3x total bet range.

It would have been nice to have some actual video footage from the original show, but this is a small sticking point. Give the game a play for free, and try out some top cartoon-themed slot games at the same time. Playtech’s range of Marvel slots like Iron Man 2 and Hulk are great picks for some progressive action.