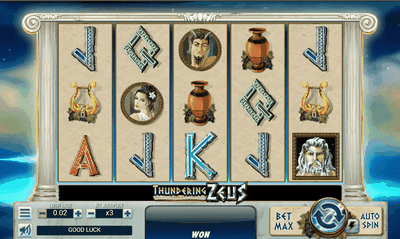 Yet another Ancient Greek-themed video slot comes your way, with Thundering Zeus. This Greek mythology themed slot tries to focus more on the lives of ordinary Joes in Greece, rather than the Gods of the land, however, it is still a Zeus themed title. The imagery is well drawn and fits perfectly with the theme, especially the high playing card icons, which for once, look magnificent.
Play for real money 100% safely at these licensed and fully regulated online casinos:
Similar games to play

Coin denominations in this slot are relatively low, and range from 0. A player can choose to wager integers of 20 credits per line, up to 10 times. Naturally, the lowest wager is only 0.

Zeus is the wild icon and it can replace itself with any other symbol, with the exception of the bonus icon. This icon also rewards players with the top jackpot in the game. As far as the bonus rounds go, players can land a bonus when they accumulate thunderbolt bonus icons on the second, third and fourth reels. The bonus round consists of free spins. The Zeus Feature is triggered when a player lands a wild symbol on the middle of the third reel. This will award the player with 3 free spins. Furthermore, players can use wilds to expand and cover the entire third reel during the free spins round.