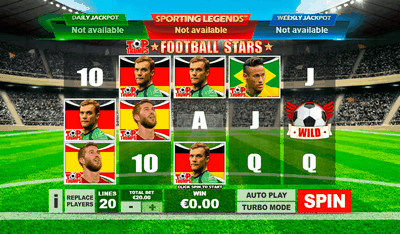 How to Play the Slot

You have to choose the teams first that will face each other on the reels. The reels will bear the symbols of a Free Games flag and three players from the team that you have selected. The symbols will pay from left to right if they are on adjacent reels starting from the leftmost reel on the active payline. The symbols of the second team will pay from right to left if they are on adjacent reels starting from the rightmost reel on the active payline. When you get Royal or Wild symbol on the active paylines, it can pay in both directions. Five of a kind can only once pay the highest win in each direction. If you want to change the team during the game, you can do that. However, this option is restricted when you are into the free games.

The key symbols of the online casino slot make the game exciting. Wild logo is the wild symbol that can pay up to 10,000 coins when you have five of them on the reels. Top Trumps is the scatter symbol, football logo is the bonus symbol, Free Games logo signifies the free games of course. The Wild symbol can substitute any symbol except the ones mentioned above.

You can win 12 free games by landing any team’s Free Games Flag symbol simultaneously anywhere on reels one and five. The symbols of every combination will pay both ways (left to right and right to left) except scatter. Free games can be re-triggered if the logo of Free Games appears during this round.

Pass the Ball Bonus Round

You will most importantly be thrilled with the remarkable graphics of this free online slot machine.