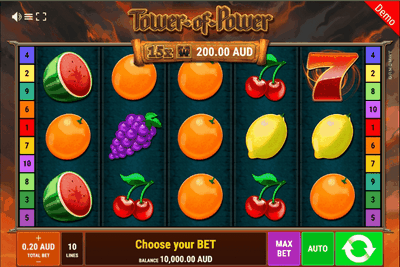 With a name like Tower of Power, we expected a fantasy theme. Given the tower’s design, maybe even a few Lord of the Rings references. Instead, what we received was a cool, but rather simple fruit machine! As a result, this 2019 Gamomat online slot finds itself stuck between two worlds. Players who want it to be more swords and magic, and those who want it to embrace its classic design. No matter which camp you find yourself in, there is a little bit of something for you to enjoy.
The game opens with a booming voice saying the title name in a way that is simply too awesome for human ears. You will see the burning sky behind the playing field. Black clouds loom above us, with occasional orange streaks poking through. We cannot tell if this is a fire or just a sunset, but it looks gorgeous either way! If this were a fantasy themed title, this would not look out of place. However, this epic visual spectacle is combined with delicious fruits and it just looks hilariously mismatched. These two radically different elements are oddly charming when put together. No doubt owed by the talented artist team that makes them look fantastic.

You play this release on a five-reel board with ten fixed paylines. As a result, you cannot turn individual paylines on or off to customize your wager. Wins are formed when you have three or more matching symbols next to one another, starting with the leftmost reel. As long as all winning combinations follow an active payline, you will receive your cash prize without any issues. Tower of Power uses the same colourful user interface we have seen in other Gamomat slots. Using it, you can change your total bet, set up Auto Play, play max bet or spin the reels. Above the board, you can open settings, turn sound on or off, or look at the paytable and help menu.

As mentioned previously, almost all icon designs are some kind of fruit. The developers must really like them, too, as these are some of the best-drawn fruits we have ever seen! Cherries, lemons, oranges, plums, grapes and watermelons are all tasty treats awaiting for you as you ascend the tower. The only one that ruins the flow of natural sweets is the lucky seven, but you can just pretend it is made of strawberries. There is only one bonus symbol, and that is the Tower Scatter. It is the highest paying icon, making it incredibly valuable.

The Tower Scatter pays from any position on the board. This is important, as it means you can score a win as long as there are three of this symbol anywhere on the board. However, the goal of this game is to get as many Tower Scatters on the board as possible! The more of them you have, the better your prize will be. If you succeed in getting all fifteen on the board at the same time, you win the top prize.

Furthermore, you can enhance any win you earn playing this release by using one of the two Gamble options. In Ladder gamble, your position depends on the size of your win. The bigger it is, the higher up the ladder it is placed! The goal is to reach the top of the ladder. You do this by hitting a button when the highlighted area is above your current wager. However, if you mistime this or have bad luck, you can also drop down the ladder, below what you originally had. If you hit the bottom, you lose all your winnings.

Another option is the Card gamble, which tasks you to guess the colour of a face down card correctly. Do this right and you win double of your original wager. This time, however, a wrong guess means you lose everything! As a result, the developers allow you to bet only half of your wager for that guess.

Honestly, we did not expect to enjoy Tower of Power as much as we did. It took a bit to get used to the difference in its theme and icon designs. However, once we got past that hump, we had a blast playing this slot! It is incredibly simple, which may not appeal to everyone. However, the above average RTP and 1000x jackpot may be enough to persuade you otherwise!
you may just end up finding your new favourite game.