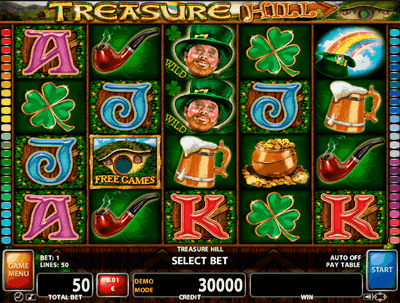 The Beer, the Fortune, the Leprechaun

Accessing this Casino Technology slot will provide you with a game layout of five reels and four rows. Therefore, it’s slightly larger than the standard video slot design. Not only that, but gamers will have the opportunity to place wagers on a total of 50 different pay lines. However, should you feel that these are too many, you can customise the amount that are in play per spin. Simply click on the button with the cog on it in the bottom left hand corner of the screen. This will bring up the game menu, where you can also change around the value of the wager that you place. A single coin in Treasure Hill casino app is set at . This means that with all lines in play, you will be placing a minimum overall wager of per spin. However, you have the ability to customise how many of these coins are in play per active line. The game offers up a range of between one and 10 for this, which means that the maximum overall bet per spin stands at 0.

On the graphics side of things, Treasure Hill contains some very impressive additions. You’ll find that the background offers up various branches of trees, with green leaves on them. Meanwhile, upon the reels of the game is where you will find its variety of different icons. To begin with, these icons are present in the shape of the often seen playing card offerings. There’s the blue J, the green Q, the red K and the purple A. Together, these are what make up the slot’s lowest paying symbols. Then comes the icon of the tankard of beer and the smoking pipe. Either of these symbols is able to provide a maximum reward to you of 2,000 coins. You’ll also get to see a symbol of a pot of gold and another of a leprechaun hat with a rainbow coming out of it. The very last two standard symbols of the game come in the form of the four-leaf clover and the golden horseshoe. Either of these icons is able to provide a maximum reward to you of ,000.

While you’re traversing the Treasure Hill, you’ll find that there are various specialities to watch out for. These can greatly assist you in forming winning combinations across the reels. For example, there’s the addition of the wild symbol. This is present in the image of the leprechaun character. As a wild, he is able to substitute for all other icons on the reels in order to create winning combinations. The only exception to this rule is the scatter symbol. And if you manage to bring five of the wild icons into view on a winning pay line, you’ll receive up to 10,000 coins as a reward!

You’ll also find that the game contains its very own scatter icon. This comes in the form of the leprchaun’s house. This almost looks like one of the hobbit houses from The Lord of the Rings. As a scatter, this icon can show up in any location and still provide you with a pay out. In this slot, it is exclusive to reels two, three and four. However, if three of them do show up, then your maximum pay out stands at a total of 2,500 coins. Furthermore, three of the scatter symbols in view will also trigger 10 freespins of the reels. And during this feature round, if you bring three more scatter icons into view, you’ll get 10 more freespins on top!

Further to these two specialities, the game also plays host to its own gamble round. This comes into play whenever you create a winning combination during the base game. If you choose to play the gamble round, you will see a new screen show up. This will have a face down playing card on it and you need to guess what is on the other side. You can try to guess its colour (red or black), or you can try to guess the actual card suit. A correct guess of the former will provide your winnings from the triggering round with a double multiplier. However, a correct guess of the latter will provide you with a quadruple multiple to these winnings.

Other Hills to Climb

Treasure Hill, as we said, has a very familiar theme behind it. And we know of several other slots to incorporate the same kind of genre. For example, you could play Irish Luck, which comes from Playtech. There are 30 win lines in this slot for you to place bets on, while between eight and 33 freespins can be won. During this feature round, players will be able to see multipliers of between times two and times 15 come into play. Alternatively to this, you could also try spinning the reels of Fortune Hill, another Playtech offering. This is a five reel, three row game with 25 win lines for you to bet on. Plus, you’ll find that there are between eight and 15 freespins for you to win as well. Extra wilds can also be found in the base game of the slot. And finally, we can also recommend the game known as Irish Eyes 2 by NextGen Gaming. This one contains a total of 25 win lines that you can place stakes on, while 10 or more freespins can also be won. This round contains triple multipliers for any wins that you create and it’s one of two bonus feature rounds.

While the imagery and gameplay of this slot is very appealing indeed, the overall theme is quite tired and “already-been-done”. Casino Technology needs to bring something exceptional to a slot game of this genre to make it stand out from the rest. Unfortunately, Treasure Hill slot machine doesn’t have anything like this. That being the case, it only exists as an average addition to the developer’s slot catalogue.