Treasure Of The Pyramids 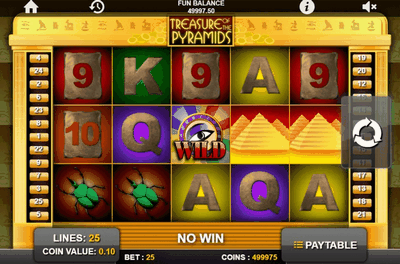 Treasure Of The Pyramids Slot Detail

Treasures of the Pyramids boasts the classic IGT slot design, incorporating
elements like wild symbols, scatter symbols, free spins, bonus games, and more.
What sets the game apart from the rest, however, is the massive 5,000 credit
jackpot which awaits lucky winners.

As the title suggests, Treasures of the Pyramids is a slot game themed around
the ancient Egyptian culture, and specifically, the three famous pyramids of
Giza.

Egypt is home to more than 110 individual pyramid structures, but in the
minds of most, the trio of the Pyramid of Menkaure, the Pyramid of Khafre, and
Great Pyramid of Khufu located in Giza are the real deal.
structures are at once immense and intricate, serving as massive monuments from
the exterior, with a wealth of hidden tombs within.

Constructed more than two millennia before the birth of Christ, the Great
Pyramid of Giza stood as the tallest manmade structure on the planet for the
next 3,800 years. During the 18th century explorers, archaeologists, and other
scientists were joined by looters and treasure hunters, all seeking to unlock
the mysteries of the three pyramids.

Artifacts and implements were pulled from the pyramids over hundreds of years
of excavation, while Egyptologists studied the sarcophagus located in the Great
Pyramid’s King’s Chamber.
of Giza and its mysteriously impassive visage, spread to the Western world,
Egypt.

Pop culture iconography like The Mummy stems directly from the age of
Egyptian exploration, and even today, tourists from around the world flock to
Giza for a glimpse of humanity’s ancient achievements.

Thus, IGT didn’t take any bold steps in designing a slot machine around the
theme of ancient Egypt, and indeed, competing companies have titles like Egypt
Treasures, Egyptian Riches, and Egyptian Heroes on the market.
commitment to bringing that theme to life is apparent at every turn, which sets
Treasures of the Pyramids apart from the rest.

The game’s title screen goes all out, featuring the title etched in
capitalized gold lettering a sunlit sky. Beneath the title looms two of the
three pyramids of Giza, while palm trees, wooden chests, and piles of gold coins
dominate the sides of the screen. The foreground features a large black panther
staring players right in the eye, and to complete the mysterious vibe, the
panther is wearing a golden chain and pawing at a jeweled bracelet.

The overall impression here is that players who are bold enough to explore
the titular pyramids in search of treasure will have to contend with this feline
guardian.

When you jump into the actual gameplay, Treasures of the Pyramids doesn’t
feature much of background screen to speak of. The main game screen is filled
almost wholly by the reels, leaving only a few centimeters on each side for the
suggestion of a sand covered desert floor.

Moving on to the reels themselves, IGT has fallen back on its standard array
of card rank symbols to start things off, so you’ll be spinning the tried and
J, Q, K, and A.
they’ll have the same generic, multicolored look as you’d find on any other IGT
slot.

As for the game’s themed symbols, Treasures of the Pyramids does right by the
IGT is attempting.
taken straight from a treasure hunt, including the Great Pyramid, the sapphire
ring, the green and gold coin, the red ankh a cross with a loop at the top, the
ruby ring, the emerald Eye of Horus, and the amethyst Phoenix, and the black
panther.

Unfortunately, IGT neglected to accompany the game’s rich assortment of
visuals and graphics with an appropriate soundtrack. Rather than the distinctive
tones of Middle Eastern music, or a suspenseful melody designed to heighten the
drama, Treasures of the Pyramids relies on standard slot machine sounds that
resemble a circus act more than anything else. While this may have been par for
the course in 2008, today players expect a fully immersive and interactive slot
experience, so the disconnect between bouncy clown music and an Egyptian
treasure hunt may be jarring for some.

If you can get passed the soundtrack mishap though, Treasures of the Pyramids
IGT’s classic slot design model.
doesn’t hold any secrets, despite the discovery theme, but what you see on the
surface is good enough for most slot players who prefer a traditional experience
over the bells and whistles of today’s game.