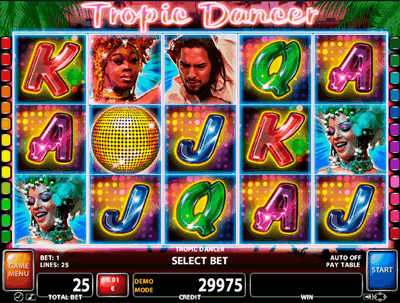 The air is heating up and the beat is only getting louder
As you will be sure to notice right away, there’s very little that’s unusual about this game’s layout. Pretty much all slots by this developer look the same feature a grid of 5 reels and 3 rows. There’s a total of 25 paylines, but they’re not fixed, which means you are free to regulate them if you want. In fact, you can play with as little as only one payline. Likewise, you will also be free to wager only 1c per spin, which is ideal for penny players. And as for the maximum amount you will be able to bet on these reels is per single spin. As pointed out in the previous section, there are two main groups of symbols here. They are the lower value playing cards and the character symbols with all the different dancers. The playing card icons are all of the same value and feature the very fittingly styled A, K, Q and J.

Following them, we have two very beautifully dressed dancers, with large headpieces and bright accessories. Following them, there’s a male dancer with long hair, wearing a white shirt and apparently posing after some impressive dance move. And finally we have the highest paying symbol on these reels, another lady – singing into a microphone, looking completely swallowed by her song. Then we have yet another male character, who represents the game’s Wild. He doesn’t exactly offer any payouts of his own, but he can replace any of the other symbols to contribute towards winning combos. Note, however, that the Wild can only land on reels 2, 3, 4 and 5. In addition, it cannot replace the game’s Scatter symbol.

The golden disco ball Scatter and a ton of freespins

The Scatter symbol in Tropic Dancer slot comes in the shape of a golden disco ball, so it certainly stands out from the rest of the icons. It’s not particularly valuable in terms of the payouts it offers, though. But what’s more important is that it will allow you to activate the game’s single special feature – the freespins bonus round. And here’s where the setup differs significantly from what you may be used to in other Casino Technology slots or just other slots in general. You won’t need 3, 4 or 5 Scatters to trigger the feature. You will need a minimum of six and anywhere up to fifteen disco ball Scatter symbols in order to receive the freespins. Needless to say, the Scatter can land in any position on the reels and it will also most times appear in stacks. Thus, depending on the number of Scatters you landed, you can receive anything from 15 to 33 freespins. Furthermore, you will also be able to enjoy a 2x multiplier all throughout the bonus round on all winnings. And better yet, you can also retrigger the feature by landing another 6 or more Scatters. This will award you more freespins, again – depending on the number of Scatter symbols.

One last feature we should mention in this slot game is its traditional Double Up mode. You can’t have a Casino Technology slot without one. It will provide you with a simple side game of double or nothing. You can choose to access it after any winning spin and you will be able to potentially double or quadruple your prize with it. Just do be careful, because a wrong guess during the game will end it. And you will also lose your prize completely. You will also be free to collect your amount at any point during the Double Up mode.

Usually, when you like a Casino Technology slot game and want to try something similar to it, it’s best to browser games by that same developer. But since Tropic Dancer slot games doesn’t quite offer the same algorithm as most games by Casino Technology, that won’t be the case here. A slot that can perhaps offer you a similar gaming experience is the popular Gonzo’s Quest by Netent. It will keep the tension up with its high variance, but it will also have a plentifully rewarding special feature in store. You can gain up to 20 freespins with a multiplier as high as 15x! Another bright and colorful game with similar specs you can try is Isis by Microgaming. With even more freespins, namely up to 30, you can also enjoy a 6x multiplier. And there’s also the high variance, so big prizes await you.