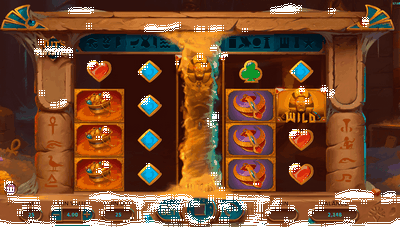 Betting starts from just 25p per spin up to a maximum of £125 per spin, making it a slot that will appeal to all types of player. Better still, the slot can be played on any device making it easy for players to play on the go wherever they are. Unsurprisingly the slot is based around ancient Egypt, however it does benefit from the Twister feature that will see King Tut morph into a wild amidst a wild sandstorm which can reward players with a column of wilds followed by re-spins where the wild twister column draws each wild closer with increasing multipliers. That’s not all, players also have the chance to collect ancient hieroglyphics, so they have additional wilds with re-spins and multipliers.

In the slot King Tut rises from his tomb to create havoc across the reels. The visuals have a typical Egyptian feel and players will see the low value card suit symbols on their reels, plus four hieroglyphics which include rings, pots of jewellery, scrolls and Horus pendants. King Tut is the wild, which is only befitting on his stature and he can replace every symbol on the reels.

There are several bonus features on offer, but players should be on the lookout for the King Tut wild as landing two will trigger the spectacular Twister feature. King Tut then chooses one of the wilds randomly and this transforms into a twister and the whole column then becomes wild. Players are then awarded with free re-spins with the wild twister column pulling the wild closer to the twister. All new wilds that land will provide the player with additional re-spins whilst also morphing into walking wilds which move towards the wild twister column.

Players that are lucky and land three or more wilds will receive a multiplier that starts at x2 and then increases by one for all additional three wilds that land in the re-spins. The Twister feature continues all the time there is one wild walking, and when there are no more wilds players have one more chance to get a wild and continue the feature, however, if no wild lands all the wilds that are part of the twister are distributed onto the reels to provide the player with a final win.

Once the last unfilled hieroglyphic symbol is filled on a reel, it will activate the feature and King Tut will transform the single wild into a twister and the player is rewarded with a re-spin. In the first re-spin every hieroglyphic symbol from the activating reel will be placed at random on the reels, however they are not added to the reel that houses the wild twister column. The wilds also then count as multipliers starting at x2 and increasing with every three additional wilds, any wilds that land morph into walking wilds and the players are rewarded with even bigger wins.