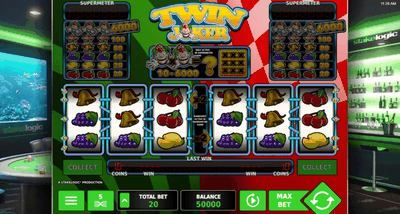 In the world of online slots, many people skip over classic slots because they don’t have enough screen real estate to give players that many innovative options. StakeLogic’s Twin Joker slot games a good example of breaking that trend, though it does use some traditional, classic gameplay to get there. You’ll see symbols that are typical for the genre here like fruit and bells, and there’s also a sizable top jackpot. This game has a higher volatility than a lot of classic slots as well, so you’ll want to adjust your bet size to something that will help you to be more comfortable with the swings.
Format and Layout

As is the case with many of StakeLogic’s classic slots, this game uses a pair of twin reels to give you two different instances of the same game on the reels at the same time. This is largely where the name Twin Joker comes from. There are two sets of three reels, and each has three rows. Coins are worth between . With both sets of reels activated, this gives you a .

Whenever you hit any winning combination, you’ll pick up at least 20 coins since that is the smallest regular pay. Those winnings are then put into the Supermeter, listed at the top of the screen. Each set of reels gets its own Supermeter. You can hit the collect button to pull the funds from the Supermeter down into your regular balance, or you can continue playing. However, this will cost 20 coins per spin, twice the normal amount, while activating the scatter payout.

Another feature that’s activated during the super game is the 2x multiplier. This will happen at random, and it’ll turn on one (or both) of the arrows in the center of the six reels. When it’s turned on, all of the wins for that spin for the chosen set of reels will be multiplied by a factor of two. That’s a cool way of adding extra value to the game without using typical features like wilds.

The joker symbol shows up on all reels, and it’s the most important symbol in the game. During the regular game, you’ll be able to get the 6,000x top jackpot for three of a kind of the joker on any payline. However, when you’re in the super game, it also turns into a scatter symbol that only needs two symbols anywhere on the reels to give you a mystery payout. This pay can be anywhere from 10 coins to 6,000x coins, chosen at random.

There are a handful of other payouts in this game as well. Three of a kind of the star symbol will pay you 100 coins. You can also pick up three of the bell symbol for an 80x win. A payout of 60x is yours for three of the grapes, and three of the lemons or cherries pays a solid 20x. There aren’t a lot of symbols in this online slot, and that means your hit-rate will be a bit higher than if there were more, an advantage that this format has over video slots.

A Note on Strategy

When you play a round of this slot with the super game activated, you’re getting a higher RTP than you do during the normal game. Along these lines, you should play in the super game as much as possible if you want to have the highest average RTP during your session. Some players won’t be comfortable with that, but the entire game is really set up so that it’s the best strategy.

Twin Joker bonus is a fun online slot by StakeLogic, and if you’re having trouble finding it somewhere, you should check out casinos that use the Novomatic software since games by StakeLogic are available through their platform as well. It has a solid two-stage gameplay, which is typical of a lot of classic slots, and the scattered joker adds a layer of excitement. Overall, this is an above-average, three-reel slot that will sit well with many players.