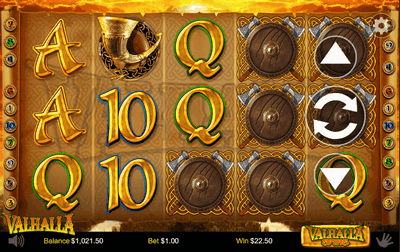 Norse mythology is a rich seam for slots game developers. Thunderstruck and the hugely popular sequel, Thunderstruck II are amongst some of the most widely played slots in the world, so it’s probably unsurprising that other developers look to emulate this popularity within similar game worlds.
The team at NextGen/betdigital were no doubt paying close attention when they came up with the idea for Valhalla, and the result is a slot that is as engaging to play for its thematic and graphical elements as it is for the chance to win big. The Norse hall of the gods, Valhalla slot games is a somewhat apt setting for this game, which draws on elements of Norse and viking themes to create an intriguing proposition for any slots fan.

This is a five reel slot with 10 paylines in all, set across three rows. That makes for somewhat simplistic in-game action, but that’s fine from the main game. When you factor in the additional features that pile in, such as expanding wilds, and the Valhalla Spins function, which gives you the chance to up the ante for bigger wins, multipliers and free spins.

Behind the theme, with its excellently drawn graphics and atmospheric soundtrack, there’s a 94% RTP. This is decent, although not the highest you’ll come across. There’s enough fun in this game to keep it engaging in spite of the lower RTP, and anything above 90% is generally considered to offer a decent return – certainly higher than what you’d find from the majority of offline slot machines at your local casino.

On the main reels, you’ll find symbols like viking horns, helmets and shields, not to mention the title character, a Norse warrior goddess with flowing blonde locks and a somewhat mean stare. There’s also the usual array of high card symbols to fill out the lower value icons, although these have been satisfyingly styled in common with the overarching appearance of the game.

Valhalla mobile slot isn’t exactly what you’d call feature-rich, but it does have one key point of difference from most other slots games – the ability to increase your stakes for better chances, with things like expanding wilds and free spins. Rather than waiting to win these for yourself, the opportunity to buy your way to these bonuses makes for an interesting challenge.

There are no feature symbols to mention in the main game, other than the Warrior Goddess herself. Adorned in green, she only inhabits the third reel. At normal stakes, she appears as a single wild symbol, acting in the usual way – that is, as a wildcard substitute for anything you might otherwise find yourself missing from your payline.

There are no scatter symbols to speak of, because you effectively buy your way to the bonus features through increasing your stakes. This is achieved through the Valhalla mobile slot Spins option, which we’ll discuss in more detail below.

Valhalla Spins is the main bonus feature, and it’s possible to play with up to 4 free spins at up to a 4x multiplier while having an expanding wild right across your third reel through this feature. If that isn’t likely to make it easier to land winning combinations, I’m not sure what else will.

Essentially, Valhalla Spins is an offer to multiply your stake in return for extra goodies. If you’re playing at Bet Level 0, i. But Bet Level 1, which comes at a price of twice your stake, provides a secure, expanding wild right across the third reel. By Bet Level 2, which is stake x4, you’re also getting a free re-spin with every spin, as well as the expanding wild.

This model ranges up to the giddy heights of Bet Level 5, 10x your stake, where you get the benefit of the wild, four free spins with every spin, and the added incentive of a variable multiplier that can reach up to 4x. It goes without saying that this is where some of the most generous single spin wins can come from, but you do have to wager extra on your bets to get to this level.

Valhalla has a theme that will instantly speak to fans of Norse mythology, or to those who enjoy a more classical feel to their slots. The in-game features too go a little beyond what you’d expect from a conventional slot, especially the Valhalla Spins feature, which makes this game worth checking out.

See if you can tame the Valhalla Spins to your advantage. With a little trial and error, it should be possible to find a Bet Level that works for you, or simply to take advantage of a little good fortune on the main game reels.