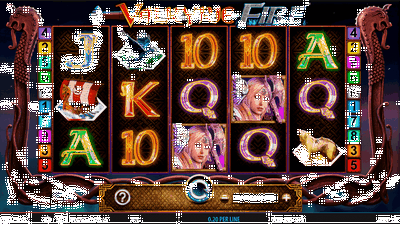 Discover more about the Norse mythology at Magical Vegas on Valkyrie Fire bonus! This excellent creation of Scientific Games will make you discover the Valkyries. Ever heard of them? They are a host of female figures who decide to die in battles. They are also depicted as lovers of other mortals and heroes. And sometimes, as the daughters of royalty. On this 5 reel, 10 paylines slot, you will find symbols like Odin, Loki, ravens, longships and wolves. More symbols include the high-card values like A, K, Q, J, 10 and 9.
Did you know that Valkyries were the servants of the god Odin? Originally, they were depicted as fierce creatures who partake in battles. But, they later emerged as beautiful female warriors. One of the Valkyries who disobeyed Odin is called Brunhilde, his daughter. She was placed in an enchanted sleep within a wall of fire as a sentence. She was later rescued by Siegfied, who breaks the spell, falls in love with her and gave her the Andvarinaut ring. Unfortunately, Sigurd betrayed her while being bewitched by Grimhild, an evil woman.

Ready to join the battle on Valkyrie Fire mobile slot? Select the bet you like from 0. The lines are fixed at 10 on all spins. Auto-Play is available, where you can pick 10, 50, 100 or 200 games to spin on its own. More options are at hand to stop when lost more than X amount and stop when a single win over X amount.

The beautiful Valkyrie symbol represents the wild symbol on Valkyrie Fire Slot. When popping up anywhere on the reels, the Valkyrie substitutes for all symbols apart for the Free Spins Bonus symbol. On top of that, the wild symbol doubles any line win in which it features like a wild symbol. This symbol acts as both a wild symbol and a line win symbol.

The Viking shield pictures the scatter symbol on Valkyrie Fire Slot. Lay your hands on scatter pays of 500, 20, 5 or 2 times your stake when 5, 4, 3 or 2 such symbols show up. Landing on 3 or more such symbols will also trigger the Free Spins Bonus feature. The cherry on top is that this round offers the Fire Stacked Wild symbols. These can appear on all 5 reels to substitute for all symbols in the game. These randomly appear on every free spin! Therefore, you can get 5 wild reels on every free spin. Top prize you’ll seize for 5 wild reels is a whopping 10,000 times your stake.