Valley Of The Gods 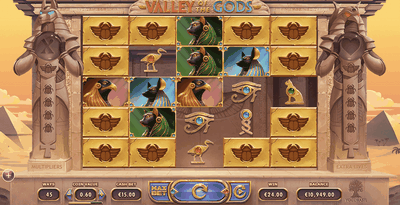 Valley Of The Gods Slot Detail

Hold on to your hats because we’re off on another far flung adventure to unearth hidden riches in Ancient Egypt thanks to Yggdrasil.
Slots borrowing from this enigmatic epoch are hardly anything new
But this is no ordinary game merely making up the numbers. The Polish game developer’s mysterious offering adopts the ‘win-all-ways’ mechanism that promises a maximum 3,125 separate ways to win, ramping up your win potential and keeping things interesting with every spin.

Eschewing the traditional slot setup, Valley of the Gods comes with 5 reels and an unconventional 1-3-5-3-1 reel layout, setting it apart from the multitude of titles that share the genre.

Sit back and absorb the stunning opening cinematic sequence, which sees desert scarabs scramble up a large Anubis standing guard over a sacred building, where they lock into place and make way for a panoramic view of this enchanting land.

The slot then transports you to a wonderous pyramid hidden among desert plains to kick off your mission, where you’ll encounter larger than life statues of various deities and hieroglyphics depicting all manner of animals.

We give the game a big thumbs up for its deployment of sharp 3D graphics, but that’s come to be expected of Yggdrasil if their previous games are anything to go by.

The developers have really doubled down on the central theme. Scan the reel-face to discover a collection of iconic symbols synonymous with the preeminent African civilization. You won’t find traditional playing card symbols on show here, but do expect to negotiate lower paying hieroglyphics, whose Stork symbol is the most lucrative. Line up 5 of these in a spin and you’re looking at wins worth 40x your bet. The revered Egyptian Gods fittingly take centre stage in the slot, representing its higher paying symbols. You can grab wins amounting to 500x your bet should the reels align perfectly with 5 Horus symbols.

Aside from the unconventional reel configuration, Yggdrasil have thrown another curveball when it comes to the main gameplay. There are no token Wild or Scatter symbols on offer, but you can feast on an exciting mix of features that includes Respins, Destroying Blockers, Lives and Multipliers. More about each of these below.

A Respin will follow every time you manage to hook a win, creating more win opportunities. The beauty of these Respins is that they continue indefinitely for every time you make a subsequent win – even during a Respin itself!

The unique setup of the grid face leaves 12 fixed spaces permanently occupied by Scarabs, which you’ll note do not spin in tandem with the other spots.

Every time you make a winning combo, watch as some of the Scarabs are destroyed. Destroy all 12 – and your luck really could be in.

If you do ever successfully destroy all 12 fixed Scarab symbols, the statue to the right of the grid enters the fray clutching an orb. Scarabs will then proceed to crawl into the statue, granting you the right to one extra life.

Use this extra life whenever a succession of Respins comes to an end, reactivating the feature to give you a second chance.

In addition to the extra life granted courtesy of the Lives feature, you can also grab a 2x Multiplier applied to your winnings once all blockers are destroyed via Multipliers.

Multipliers will then increase in increments of 1 for every 5 Scarabs you collect. Additional Multipliers continue to be applied to every win you make during a spin, and your total balance makes its way to your account once the Respins feature terminates and your Lives are exhausted.

Valley of the Gods is given a medium to high volatility rating, meaning wins don’t come around all that often, but which yield moderate payouts on the times they do.

Valley of the Gods on Mobile

The slot transfers to the small screen with ease, incorporating the game controls seamlessly across all modern mobile devices – be it Android or iOS.

Yes, the graphics look great and we know everyone loves an Egyptian-themed offering, but this game will really be remembered for its innovative bonus games. Yggdrasil took a risk by choosing not to include Wilds or Scatters, and the unfamiliar reel-face may cause some consternation. But the heady mix of Multipliers, Destroying Blockers, Lives and Respins earns Valley of the Gods its deserved place as one of best video slots available.

Incorporating the win-all-ways mechanic is a smart move, too, adding another layer of intrigue to this mysterious creation.

Give the game a try today to take in the majesty of the Ancient Egyptian empire with the help of Yggdrasil. You’ll thank us for it later!

Valley of the Gods at Wildz Casino

Valley of the Gods, plus hundreds of other popular casino games, are available to play today at Wildz Casino.

Who released Valley of the Gods?

This video slot was created by software provider Yggdrasil.

Can you explain the ‘Lives’ feature?

This is activated whenever all 12 blockers are cleared, prompting 5 Scarabs to grant you one extra life. Your extra life can then be used to reactivate your last Respins round as a second chance feaure.

Does the game offer Wild symbols?

No, it doesn’t, but this is counterbalanced by the four compelling bonus features.