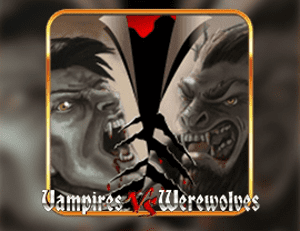 Vampires vs Wolves (Pragmatic Play): Overview
Many online slot themes are so strongly associated with individual games that players will automatically hold new releases to the high standards of these classics. When it comes to the supernatural world of vampires, it’s hard not to think of Microgaming’s 2011 super hit Immortal Romance which, in large part, thanks to its legendary soundtrack and unique narrative, is considered one of the truly greatest online slots ever released. Due to this, it’s not unlikely to think that players have certain expectations when faced with themes they might be familiar with from before. With the soundtrack in Vampire vs Wolves being good enough to please most cork sniffers, we’re off to a promising start.

Powered by Pragmatic Play, Vampire vs Wolves is a fairly simple 5 reel slot with 10 paylines that can be played across all devices from 10 cents up to 50€ per spin. With no base game features, all focus is on the free spins game where you’ll be forced to make a decision – fight alongside the vampires or join the werewolves. Ultimately, it’ll come down to whether you’re a risk taker or someone who likes to play it more safe.

Set in what could very well be Victorian London on a hauntingly misty night, you get a chance to encounter Pragmatic’s stylishly fashionable gothic-looking vampires. Having slagged the studio lately for its rather generic material, it’s refreshing to finally see a slot of decent quality. With a spooky, but equally superb, soundtrack to set the mood, symbols on the reels include traditional card suit symbols in gemstone design. More rewarding are the picture symbols which are represented by the lead antagonists, of which the white-haired bloke is the most valuable, giving you 80 times your stake for 5 of a kind. There’s also the all-important wild symbol which substitutes for all regular symbols – 5 of them on a full payline will add a 100 times your stake payout to your win collection.

Triggering the Free Spins feature here is a bit unusual as it only comes with two scatters, albeit stacked. If the howling wolf scatter appears to fully cover reel 1 in combination with the haunted mansion on reel 5, the free spins round will come into play where you’ll get to pick either the Wolf Free Spins or Vampire Free Spins.

The Wolf Free Spins round is the slightly less volatile option and will let you play a total of 14 spins that cannot be re-triggered. Here, three of the vampire symbols transform into werewolves, which effectively means they’re turned into the same symbol, thus increasing your chance of landing a wild line since they all share the same value as the wild.

The Vampire Free Spins round is a little bit more volatile and will set you off with only 8 spins which are also not possible to re-trigger. During this feature, when a vampire symbol with a red border (there are three of them) appears on the reels, it can randomly turn into a sticky wild and remain locked in place throughout the feature.

Merely a few minutes into our session, we managed to drop our first bonus and, being the degenerates that we are, opted for the more volatile option. Watching the screen fill up with sticky wilds was, of course, a thrilling experience and walking away with an 800 xbet win undoubtedly warmed up our hearts to the game. However, during our later sessions, we also got to experience the blood-sucking side of the slot.

There are some downsides to this game, in our opinion at least. First of all, the potential is too low to really make it worthwhile – 1000 times your stake doesn’t really cut it, especially given the fact that it’s quite volatile. A few of our testers also felt that the main game was a bit tedious and that the lack of features made it pretty much an all or nothing slot, resembling classic Novomatic in that sense. If you enjoy the music and excellent design as much as we did, you’ll be fine. If not, Vampires vs Wolves will probably be a real pain in the neck for you.