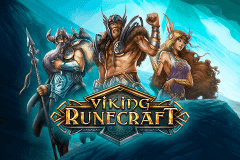 Viking Runecraft mobile slot is a video slot that explores the ancient life of the warrior tribe of Vikings. This slot game, which is provided by Play’n Go, delves into the spirituality practised by Vikings at the time. The set includes a blend of Norse mythology in this respect, which allows players to ride to war in the presence of famous gods like Thor, Odin, and Freya, and each one is packed with unique bonus features.

The Vikings’ theme is explored by software developers far and wide, and Play’n Go joined this list in 2017 with the release of Viking Runecraft. The slot machine is a visual slot wonder that exploits the popular themes of Vikings and Norse gods. With seven reels placed over the same number of rows, the Viking Runecraft online playtable towers over that of regular slots. The game straps players in for a unique ride through gifts from the gods, upgradable levels, bonus rounds, and winnings of up to 100,000 credits. These features and others offered in the game are discussed in this Viking Runecraft slot review.

Viking Runecraft video slot is relatively uncomplicated when it comes to gameplay with only two steps to take, and they are achieved using the control bar at the screen bottom. Punters have to choose from the presented bet range between 0. Spinning the reels can be done using either the spin or autoplay function. The payouts of each round are displayed in the WIN section.

Play’n Go’s Viking Runecraft slot machine accepts stakes from as little as 0. The bet choices are preset and presented on the UI panel for gamers to select. These betting limits are similar when playing the slot for free and actual cash. The chosen value plays a role in the wins offered for character combinations.

Viking Runecraft online slot has a Return to Player rate of 94. This RTP rate places it slightly behind the average slot game, which spots 95%. The percentage plays a role in vaguely predicting the winnings likely to be provided by the game over a long period. With high volatility, Viking Runecraft is also expected to award rare but sizeable winnings.

Viking Runecraft slot machine presents players with a cocktail of payouts and bonuses that can be collected randomly in any spin. The pokie machine takes an unusual approach with its rewards to feature elements that are unique to its theme.

Viking Runecraft slot features nine symbols – the first five, which are denoted by the Runes of Valhalla, award the small payouts, while the other four (god sigils) grant the big wins. This slot game pays for the cluster formations of five or more symbols. The lacking use of paylines means that the combinations can be formed anywhere on the grid both horizontally and vertically.

Gift of the Gods

This bonus is activated after any round that does not land a winning combination.

Viking Runecraft slot includes levels that are scaled when players clear winning clusters on the indicated patterns. Each level is graced by the presence of a god.

This bonus is given when at least one of the runestones is collected in a payout cluster, and the level pattern is cleared. In the offer, players are presented with a wheel covered with ten spots, five of which carry winnings.

Collecting winnings using twenty symbols activates this offer, which grants one of four bonuses, including:

When the charge of destruction is filled with twenty more symbols, and a free spin is awarded. Each win drives up a multiplier bonus, and it can go as high as fifteen times.

Viking Runecraft slot shows off Play’n Go’s ability to use 3D and cartoon graphics in imaging. The game is set on the icy plains of the northern hemisphere with snow blowing around the seven by seven grid. At any time during gameplay, one of the four Norse gods stands to the right of the screen.

When engaging the Viking Runecraft, it is recommended to play the slot game for real money, which makes any winnings withdrawable. However, those not willing to lose any cash can play the slot demo where no cash deposits are necessary. One should understand that winnings are random, and there is no definite approach on how to win aside from luck dependence.

Viking Runecraft online slot is suitable for gameplay on both desktop computers and smartphones. The game operates in a no download mode on both platforms since it uses the modern HTML5 technology.

Viking Runecraft slot features one of the most significant fixed jackpot amounts, which amounts to 100,000 credits. This win is offered for a combination of fifteen or more hammer symbols and when the highest wager of 100 credits is placed.

Viking Runecraft slot game is one of the most entertaining releases by Play’n Go. The game gives players a lot to look forward to with multiple bonus features that range from wilds and duplicate symbols to free rounds and multiplier incentives.