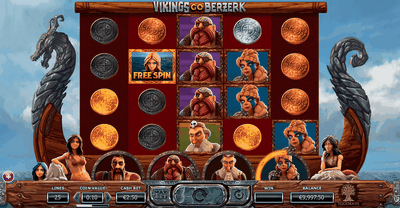 Swedish developer Yggdrasil Gaming explores its Nordic roots with a sequel to their popular Vikings go Wild slot. This time, they lads aren’t content with being just wild, so have kicked it up a gear to berserk mode.

Berserkers were those next level warriors who would go into a sort of battle trance, hacking their way through enemy lines, until only death brought them down.
The sequel is a more developed game than the first, enhancing several features, while retaining everything that made the original a hit.

Vikings Go Berzerk slot has a similar look to the original, so fans will feel at home straight away. Its 5×4 reel setup sits on a dragon carved Longship as it powers its way through the North Sea. No doubt it’s on the way to do so some wanton pillaging, maybe ransack a village or two. Visually, the graphics aren’t a paradigm shift over the first, but they are subtly better, more redefined, the mark of a developer constantly honing their craft.

What’s not so berserk, to the relief of some perhaps, is the medium volatility the game ships with. Hit frequency, meanwhile, is a shade over 1 in 5, on 20. There are several ways of unlocking free spins, giving them a frequency of 1 in 128, on average.

Playable from 10 p/c up to £/€125 per spin, the key rule on the high seas is landing combinations during the base game and triggering quite a number of features. Vikings Go Berzerk casino slots uses 25 paylines, where combinations of three or more similar symbols constitute a winner.

All symbols are custom made, consisting of 4 lows and 4 high pays as the regulars. The four low pays are coins of various metals, while the high pays are all Viking warriors or warrioress’ – each one having gone through a makeover from the first slot to harden them up. Five of a kind values range from 6x for the Skaede looking one up to 10 times the stake for the tough guy berserker. The big Celtic backed WILD, is well, the wild, which can substitute for anything except the scatter to form a winning combo.

During free spins, any Viking that lands does battle with the Siren. If it wins, it is turned into a sticky wild for the remainder of the feature. Another new feature is the Rage Meter you will be able to see at the bottom of the screen.

When play begins, one of the Vikings has their meter half filled – the Welcome Rage. Then, during the game whenever combinations of the premiums hit, their respective meter is slowly filled up. When a meter is filled, 7 free spins are awarded with the respective Viking in berserker mode. Vikings that go Berserk always win battles against the Siren and become sticky wilds of the duration of the free spins. These free spins cannot be retriggered, but it is possible to win more free spins via treasure chests.

Yggdrasil has nailed the sequel formula in Vikings Go Berzerk. It is recognisable from the first, and brings all of the parts players loved while stacking it with a host of extras. The result is what every good follow up should be. A solid improvement fans will enjoy even more than the original.

What makes it great is the extra chest and of course the way characters go berserk. Berserkers are a great touch, amplifying any free spins round they are a part of. If you manage to trigger Ragnarok Free Spins, make sure to stand clear of the carnage. Not only will Sirens be dealt to, but sticky wilds can be super effective when they rack up in greater numbers.