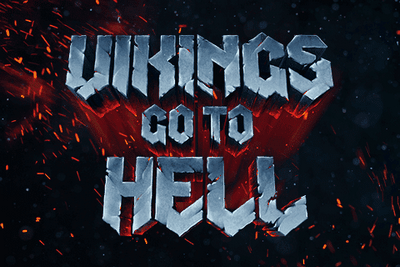 The Vikings Go To Hell slot games the third in a series of Viking themed games from Yggdrasil Gaming. The previous incarnations, Vikings Go Wild and Vikings Go Bezerk were immensely successful, so it’s time to see what this latest instalment offers.

This time, it appears that our brave warriors are battling it out with the underworld gods and you’re about to join in! MrCasinova. Full of stunning animations, graphics and gameplay features, the Vikings Go To Hell slot Yggdrasil has produced is a worthy addition to the trilogy. It’s also completely mobile compatible, meaning that you’ll be able to connect to the game wherever you go and on any device you choose.

The Vikings Go To Hell mobile slot machine is a five-reel slot game with four rows, five reels and twenty-five paylines. All of this is set to an appropriately designed backdrop complete with an ornate stone structure that looks rather like something you’d expect over a burial ground. Further back from that is a desolate landscape, one that you might rather expect to find in hell. To each side of the reels are the Viking rage meters and all the additional feature buttons, such as autoplay and max bet, can be found at the bottom.

The symbols of the Vikings Go To Hell slot are all beautifully designed, with the four high-value symbols all represented by various scary Vikings. Thankfully, they don’t look too worried about a visit to hell so we might all be okay taking this journey with them! The lower-value icons are some rather useful looking weapons, such as a sword, hammer, axe and as well as bow and arrows.

The last icons to watch out for are the bonus ones. The wild is simple – a large gold block with the words ‘Wild’ emblazoned across it. There’s also a free spins symbol and this is even more recognisable as this has the devil’s face leering at you, and it spells out ‘Free Spin’.

If you like free spins, then you’re in luck because Vikings Go To Hell bonus come around quite often. To grab these free spins you need to land anywhere from three to five scatter symbols. This will award you 7, 12 and 16 free spins depending on the number you landed. When this occurs, all the Viking symbols on the spin will fight a demon. If they are successful in fending the demon off, the place they are in will turn into a sticky wild for the remainder of the free spins. There will also be a rage point added to the Viking rage meter that is found on the side of the reels.

After each spin has occurred, a Viking will land on the reels and battle against the Lord of Chains. Three hits will defeat this character and in so doing, the Viking will change into a sticky wild and the Lord of Chains will turn into two sticky wilds. This will then see you move up to level two and gain the ability to claim an extra seven spins.

During level two of the Vikings Go To Hell slot, you’ll find yourself fighting it out with Lucifer after the spin has occurred. In similar fashion to the Lord of Chains, you’ll need to hit him three times to win. The Viking that does so successfully will become a sticky wild, with each of the three successful hits adding an extra sticky wild to the reels. With the final defeat, all of the Vikings left on the reels will turn into sticky wilds as well.

Treasure Chests only turn up on the fifth reel and will spin to display an Epic or Good table containing one of these rewards:

The last part of the bonuses of the Vikings Go To Hell slot is the Rage Points. Whenever a spin results in two free spin bonus icons landing on the reels, all the Vikings that are on the reels can fight a demon. If victory is achieved, then a single point gets added to the rage meter of the Viking. This will see that specific icon turn into a sticky wild for the duration of the subsequent respin. When the rage meter reaches its capacity, you’ll win seven free spins with the Viking who wins the fight.