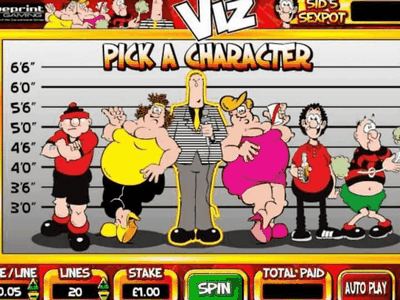 For those of you that aren’t aware, Viz online slot is a satirical British comic book that has been in existence for a very long time. Although its audience is not as large as it once was, there is still plenty of appeal for this naughty but entertaining franchise. Blueprint Gaming’s Viz slot is proof of that. A popular title, Viz is played over 20 lines, which are spread carefully over a total of 5 reels. Viz also has a pretty grand wagering range, with line bets ranging from 0. Viz can cost players anything from a low of 0. A top non-progressive jackpot worth 250,000 coins is the ultimate prize in the Viz slot. There is also a progressive jackpot to be won, too.
Special Features

The super wild icon in this slot is pretty easily to identify. You can’t miss it. Designed in the style of the comic, the super wild can replace all symbols barring the four special icons, and will double the win of any winning combination that it appears in.

The four bonus icons all play a very special role in the Viz slot, but only one of them can hand you the progressive jackpot. Sid’s Progressive Sexpot is triggered when the player lands 5 Sid Sexpot icons anywhere on the reels. The trick is that they have to be found during the free spins bonus round. Now that, is a challenge.

Two other bonus features appear in the Viz slot. The first of these is Johnny’s Wheel of Fartune. Get 3, 4 or 5 of the Johnny icons in any position on the reels to trigger the Johnny’s Wheel of Fartune bonus. The reels will then spin and land on multipliers, which will be added to the total bet made by the player. Up to 100x the bet can be won by the player on each reel.

Viz’s final bonus round is the Usual Suspects Bonus. Landing 3, 4 or 5 of the Usual Suspect icons on the reels in any position to trigger this bonus. Players can then select a multiplier by clicking on a character. That multiplier will then be added to the total amount staked by the player, to give them a cash prize win. This can be worth as much as 500x the total bet.