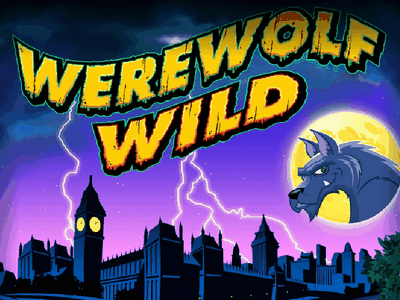 If you’ve read books or watched horror movies that included werewolf’s your perception of them will likely be one of ferociousness, however the werewolf’s that comes out to play in the Werewolf Wild slot machine won’t be attacking you. Instead, they’ll be rewarding you for being brave enough to stand your ground and be in their company!
Powered with software by Aristocrat, they have clearly garnered inspiration from the 1981 movie ‘ An American Werewolf in London ’ as you find yourself in the city back in the Victorian era with famous landmarks like Big Ben and the Houses of Parliament dominating the skyline while stars twinkle brightly in the purple sky late at night.

Out of the Shadows

As you walk the cobbled streets of London late at night you will encounter a variety of characters coming out of the shadows, including a ‘Bobby’ on the beat and a well-to-do Aristocrat, however it’s the howls of the werewolf that will be most welcome as they are worth the most.

I often criticise the sounds used in casino slot machines by Aristocrat but it’s great to see that they have put some effort into the sound effects here as you’ll hear the loud chimes of Big Ben in addition to more sinister haunting sounds that will send a shiver up your spine.

Werewolf Werewolf Wild slot standard structure of 5 reels with 3 rows and 25 fixed win lines with a variety of bonus features included to ensure your bravery for taking to the dark streets of London is rewarded.

This includes a random Claw Swipe feature that can see up to five symbols transformed into Wild symbols, a Mystery Coin feature where you can win a multiplier of up to 40x your stake, the Werewolf’s Touch Bonus feature which sees you enter a free spins mode with Contagious Wilds and there is also a gamble feature for those of you who aren’t easily spooked!

Get Your Claws into Big Wins

The werewolf likes to show he is on your side by randomly appearing in the base game to swipe his razor-sharp claws across the reels to transform up to five symbols into Wild symbols to help you get your claws on big wins.

Speaking of symbols, let’s look at the pay table so that you know what to expect on the reels of this Werewolf Wild mobile slot slots game. Unfortunately, Ace to 10 playing card symbols make an appearance as usual, however the other eight cartoon-styled symbols are much more impressive to look at.

Three of these are special symbols with the werewolf being the highest-paying symbol of all, rewarding you with up to 1,000 coins whenever he prowls onto the reels. He also dominates the reels as the Wild symbol, possessing the power to substitute for all but the Scatter symbol (a silhouette of the werewolf howling against the full moon) and the Bonus symbol (a gold coin).

You will also meet an aristocrat who enjoys the finer things in life and his maid who will throw up to 500 coins in your direction, the chubby policeman who is on the hunt for your new beastly friend offers up to 400 coins for information you can provide, while locating lost carriages see you rewarded with up to 300 coins and spotting street lamps will see your eyes light up with wins worth up to 250 coins.

Gold coins can only land on the first reel and whenever you find them on screen at the same time as at least one werewolf you’re in for a treat as this combination sees you receive a random multiplier of your stake worth 2x, 3x, 4x, 5x, 10x, 20x or 40x. A simple yet very lucrative game feature!

The werewolf’s love to come out for a game of hide-and-seek with the policemen of London whenever the full moon appears and you’ll be having lots of fun too as they signal a free spins feature which is where your biggest wins will come from playing this online slot.

That’s not all though as the feature also boasts Contagious Wilds. This sees Wild symbols that appear next to any of the other three character symbols (aristocrat, maid or policeman) send them Wild too for sensational wins.

I think this is one of the best real money online slots ever to be released by Aristocrat and I know that many players agree with me due to the theme, graphics, sound effects and variety of features which will have you howling in delight at huge wins!