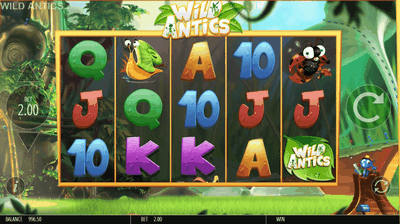 Wild Wild Antics casino app spin and stop game that offers a different twist on video slots. Rather than spinning the reels and letting them fall where they may, you start the spinning and then stop the reels whenever you want. You get maximum control along with a little bit of lady luck. The game also includes numerous bonus features that only add to the excitement and fun. If you want fast-paced action that never stops, try Wild Antics.
How to Play Wild Antics Slot

There are 20 fixed paylines in Wild Antics, so just use the up and down arrow keys to place your total bet. Whatever you bet will be distributed evenly across all 20 paylines.
X, 5X, 10X, 50X your wager. Automatic spinning continues until all spins are completed, you trigger a bonus, you reach your loss limit, or you click the ‘Stop’ button. You can even limit your total losses per session up to 75X.

Choose your wager and then click the green ‘Spin’ button at the far right to get things started. When you are ready to stop them, click the ‘Stop’ button. At the far left of the user’s screen is a pink button that shows you the paytable when clicked.

Just a little bit more about the Autoplay feature before we get onto explaining the rest of the game. When you click the ‘Autoplay’ button, you will have the opportunity to choose up to 50 automatic spins. Whatever you wager on the first spin will be applied to the rest of your automatic spins. You will not be able to automatically spin if you do not have enough credits to support continued spinning. Likewise, running out of credits before automatic spins are completed will stop the process.

There are both Wild and Scatter symbols in Wild Antics.
Since Wild symbols can create their own winning combinations of three or more, it is possible to register more than one win on a single payline. In such a case, only the highest paying win is awarded.

This bonus is triggered by landing 2 Scatter symbols and a Worker Ant symbol during standard play.
Free spins are initiated automatically and continue until all are exhausted. Additional free spins cannot be earned in this bonus game.

A Soldier Ant symbol triggers this bonus when combined with two Scatter symbols on a standard spin. This round features a special wild symbol that can appear on all 5 reels. It will wander and roam on alternate spins, just as with the Worker Ant bonus. Should 2 Wild symbols meet (aka ‘colliding’) on the same reel and in the same position, a multiplier of 2X to 5X will apply. Again, additional free spins are not possible.

Two Scatters and a Colonel Ant symbol trigger this bonus round. The bonus starts with a new 5×4 reel format that features 40 paylines instead of 20. The roaming and colliding Wild features of the previous 2 bonus games are active in this game as well, but colliding Wilds also expand to cover the entire reel on which they appear.

Landing a Queen Ant symbol along with two Scatters triggers this fourth bonus game. This bonus is very similar to the Colonel Ant except that the Queen is the special symbol here. The other difference is that you will be working with a 4×4-reel format rather than 5×4. Still, it is possible to achieve Wilds on 12 reel positions under this arrangement.

At the conclusion of any of the above bonus games, a new bonus game can be unlocked if one of the ants pops up from the anthill and uses a whistle to summon Jet Pack ants. Should that happen, the player is given the opportunity to choose a single Jet Pack Ant to reveal a new bonus game. The player can replay the game just played or wind up with one of the other three.

Jet Pack Antics is a randomly triggered bonus round that can occur anytime during standard play. It is triggered by an ant who comes out of the anthill and summons Jet Pack Ants to the screen.

Wild Antics – This feature includes an Aardvark chasing an ant across the screen. Eventually, the Aardvark wins, dropping an anvil on the ant’s head to reveal stars that turn into wild symbols.

Aardvark Antics – With this feature, the Aardvark continues to chase the ant across the screen. As he sucks with his trunk in an attempt to catch the ants, certain symbols will be turned wild.

Frantic Antics – This feature is only engaged once the reels stop spinning. One ant will blow his whistle while others appear next to each symbol on the reels. The ants will then jumble reels to reveal new symbols. If the ant with the whistle blows again, the process is repeated.

Jet Pack Antics tend to move very quickly. Therefore, it may take some getting used to before new gamers can follow all of the action. The good news is that once the player has chosen a Jet Pack Antic, nothing else need be done. The player can sit back and watch the game take care of everything else.

In order for combinations to qualify as wins, they must consist of at least three like symbols appearing consecutively on an active payline, beginning from the far left position. All line wins are calculated by multiplying the value of the winning symbols by the wager on that line. Again, all 20 paylines are active during play. You can easily figure out what you are wagering by dividing your total stake by 20. Bear in mind that 40 paylines are active in two of the bonus games.

Should coincidental wins occur on the same payline during standard play, only the win with the highest value is awarded. It is possible to win multiple prizes across multiple paylines on a single spin. However, there is a transaction limit with this game. That means the game will immediately stop should you reach the limit.
no additional prizes can be won.

Scatter wins occur whenever a Scatter symbol appears on a standard spin. Only a single symbol need appear to generate a scatter win. Also, scatter wins are paid separately. That means they do not count against the ‘one win per line’ rule. Any misuse of the game or malfunction thereof will also stop the game immediately. All previous plays and pays are avoided in such a case.