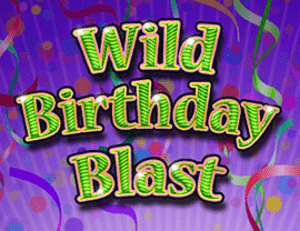 These animals know how to throw a party – the reels include parrots, giraffes, koalas, bears and elephants complete with sparklers, party hats and streamers. The elephant is the most valuable of the animals, awarding payouts of 1,250 times your line bet if you land 5 on a payline.
The partygoers are joined by lower value playing cards as well as a wild that substitutes for everything apart from the bonus symbols – there are 2 of those. First we’ll look at the gift box which can appear on all reels on every spin. At the end of each spin, the gift boxes are transformed into a random symbol and a new payout is made with the added symbols in place.

Land 3, 4 or 5 of the free spins scatter symbol anywhere on the reels and you’ll trigger the Free Spin Bonus feature and with it 10, 15 or 20 free spins. All winning combinations formed during this feature will be boosted by a 2x multiplier with all wins doubled. It’s possible to re-trigger more free spins here too with up to 40 available.

You can also hope to receive an invitation to the Surprise Party Bonus feature – triggered at random, you’ll be taken to a new screen and presented with 4 doors. Behind each 1 is a party guest who will award you a cash prize. Some doors will feature multiple guests and offer even bigger prizes.

Wild Wild Birthday Blast slot games light-hearted affair – the graphics are done cartoon style and feature some nifty animations to mark winning spins. The soundtrack bounces along, punctuated by animal noises if they form part of a successful combo.

Given the comedic theme, you’d expect the variance here to be on the low side – in fact, it’s a little higher than that. Some decent wins are possible, especially via the free spins round where the doubling multiplier moves things along. Yes, the theme is supremely silly. Get lucky with the free spins though and this wild birthday party can certainly be a blast! I also recommend you try some other 2 by 2 Gaming titles such as Spell of Odin or Nauticus.