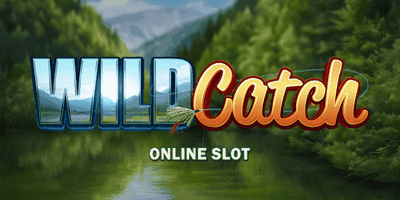 It’s time to fuel up the boat, load it with all your fishing equipment, and take off to the middle of the ocean for a sea fishing adventure in the hope of reeling in the biggest wins. Of course, we’ve already casted our rods in the Reel ‘em In slot machine from WMS and the Big Catch slot machine from Novomatic – but will Wild Catch slot be the ultimate catch of the day?
The Wild Catch slot machine has been developed by Microgaming and is played across 5 reels offering 243 ways to win. You’ll be able to take to the ocean and cast your rod from as little as 30p up to a maximum of £150 per spin with whopper wins of up to 7,500 coins that will make your rod bend to reel in!

What instantly struck me when I loaded Wild Catch is the lack of sound effects. I expected to hear the swooshes of the sea rippling against the boat, the clicking sounds that ring out when your reeling the line in, or the splashes of fish as they leap out of the water to really set the scene, but nope – none of that. Instead there is silence until you click on the spin button with the mechanical sound we have heard so often in online fruit machines to endure, however when you trigger the bonus features the reels suddenly burst into life with an upbeat tune as though someone has turned the radio on full blast – and you’ll definitely be partying on the boat with what you catch!

Big Catches to Reel In

The setting is quite stunning with the reels positioned behind your speedy fishing boat and two rods at the back which have been casted deep into the ocean in this exciting sea fishing adventure which sees you encounter a total of twelve symbols with big catches to reel in.

A cheerful fisherman donning a cap and sunglasses poking out from a life ring buoy represents you on the reels. Not only is he the Scatter symbol with three or more appearances by him triggering the free spins mode, he is also the highest valued symbol on the reels as five on a payline are worth 50x your stake. The most striking view of all is the Wild symbol, which is represented by a swordfish, and this can substitute for all symbol except the fisherman but also brings additional perks that will be discussed below.

You could also see yourself scoop a wooden carved trophy for landing the catch of the day and beating all of the other hopeful fishermen, there is a stunning view of your boat, a pink lure which will entice to biggest fish to bite, a set of scales to weigh your catches, and despite the theme offering ample opportunity for a plethora of other fishing related items, Ace to 9 playing card symbols have been included too.

Not only does the swordfish (Wild) have the ability to substitute for all symbols aside from the Scatter, when you land three or more of them at once you’ll be enjoying a mini free spins feature. This sees you set your reel up for five free spins with all winnings subject to a 3x multiplier, and each win that has hooked a swordfish sees an additional free spins added to your counter!

While netting swordfish is always an adrenaline pumping experience, the very biggest catches come when cast your rod multiple times for free in the extremely rewarding free spins feature. To get this opportunity you’ll need the fisherman (Scatter symbol) to appear three or more times on the reels, with the more symbols that appear resulting in more free spins to enjoy.

Catch of the Day?