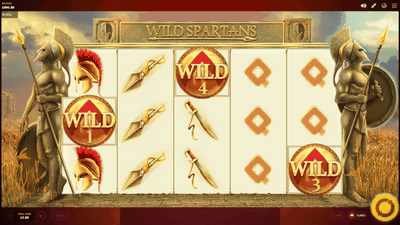 Wild Wild Spartans slot themed on the famous warriors from Sparta, something we have seen before – WMS’ Spartacus Call to Arms and Spartan by Spade Gaming are just two examples. The symbology is similar to that of Nextgen’s 300 Shields game and we have the reels set on a stone plinth guarded each side by a Titan in full battle mode. The music isn’t too militaristic though and is more of a gentle medieval strain until we get the powerful battle cry of the Spartans when they land on the reels. So can we battle past these warriors to get to the treasures of Sparta?
The game offers Red Tiger’s standard format of 5 reels consisting of 3 rows but with only 10 pay lines with stacked symbols and naturally an in-play feature as is their trademark. The lowest pays are awarded by the card values which range from 2 to 8x bet for a 5-of-a-kind win. The Golden Helmet and Spear are top and pay 18x stake followed by the Dagger at 9x bet for the 5. These premium picture icons do not appear stacked in 2’s or 3’s like the card values though.

The Wild shields now arrive to play their part. These can land anywhere singly and we get a dramatic animation as a Spartan Warrior appears from behind them with a mighty roar and smashes his spear against the shield to reveal a random number. As you may have surmised, this is the number of subsequent paid spins they will remain as sticky Wilds for. At random, the Titans guarding the left and right of the reel grid may awaken as the reels darken and strike extra amounts to any sticky Wild numbers in view. You will also get 50x bet for any full line of 5, by far the highest line value.

Now time to mention the game’s scatter, a beautiful blonde Princess to balance out the macho fighting characters of which we need 3 to land anywhere in view to trigger a random number of free games, 5 or more. Should she appear in these spins you will receive 1 extra each time and as with Red Tiger’s Golden Lotus slot the Wilds are automatically sticky for the duration of these free spins.

Spartan Wild slot is simply a far higher-volatility version of Golden Lotus mentioned above with half the pay lines and far higher symbol awards. The RTP is better though at 96. Wilds and random feature occur with some ferocity! The Wilds are very frequent although frustrating as just as you are near to getting 4 or 5 on a line one expires only for another to appear next spin in the wrong spot. The free games are hard to trigger but are capable of some sizeable awards – I have definitely worked up the courage to confront these Spartans.