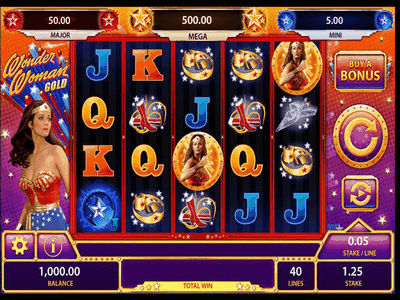 DC Comics titles seem to have changed hands in the online slots world like a rather noisy baby being passed round the relatives. Cryptologic/Amaya, of course, have a series of DC Comics online casino slots that recall the original comic book themes. But with Wonder Woman Gold, Bally (now an SG Gaming company), fans of the 1970s TV series will have plenty to enjoy.
Featuring images of Linda Carter – the curvy star of the terrible/classic (depending on your taste) ’70s comic series – Wonder Woman Gold has free spins, three Mega jackpots, and a unique big ‘Buy a Bonus’ option for big gamblers. But is this online slot a big-screen blockbuster or a small-screen damp squib? Let’s review it.

The Wonder Woman Gold video slot is played out over 40 paylines, and you can pick stakes as little as 1. The max bet is 200.

If you remember the original TV show, or you’re a big fan of retro US popular culture, you’ll recognise the characters. In fact, just two characters from the show are present on the five reels – Wonder Woman’s alter ego, Diana Prince, and Colonel Steve Trevor, who first discovered the island of Amazons where Wonder Woman came from.

Diana Prince pays 120x your line bet for 5-of-a-kind, while five Colonel Steves pays out 48x the line bet for 5OAK. Next comes a fighter jet at 32x for 5OAK, the Wonder Woman belt at 24x, and a knee-high boot also at 24x. The Jack-to-Ace symbols are fairly poor payers, dishing out just 16x the line bet. However, with 40 fixed paylines you’re effectively losing out each time you spin.

If you’ve played another recent Bally release – the Oriental-themed slot, Dragon Spin – you’ll recognise the Mystery Stacked Reels feature. Each reel contains a mystery symbol that can appear stacked. All symbol positions are replaced by the same symbol before the spin.

There’s a Wild symbol in this online slot, the ‘WW’ logo. It only appears on Reels 2, 3 and 4, but it will expand to fill the whole reel when it lands.

Hit The Mini, Major, Or Mega Jackpot For Real Cash

Where Wonder Woman Gold differs from other DC Comics slots is in the Jackpot bonuses. Mini, Major, or Mega symbols appear on Reels 1 and 5 only. If they land on those reels at the same time you’ll bag the big progressive.

We should mention the ‘Buy a Bonus’ option for punters here. This basically lets you skip to the Free Spins bonus by ‘buying’ your feature. If you’ve got the budget it can be a worthwhile enterprise, especially as expanding Wild symbols come into play too. We bought into the Buy a Bonus for 27.

Wonder Woman Gold is an online casino slot that can be pretty wild in terms of wins. You’ll find your bankroll swinging around like Wonder Woman with her gold whip, but if you land stacked symbols and an expanding Wild you can bag some impressive wins.

We found it better to up the coins level and buy the occasional bonus. But forget the jackpots, as we rarely found any of those symbols appearing at all.

If you like Bally’s ‘big bet’ style of game, do check out Dragon Spin with its big expanding Wilds. The payouts seem to be a little more generous (just a little, mind) than Wonder Woman Gold and there isn’t the temptation to ‘buy a bonus’ of any time.