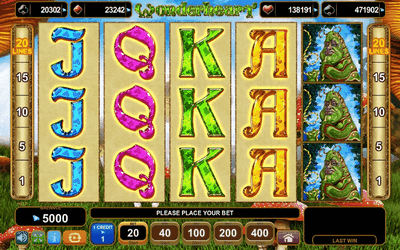 Wonderheart casino slots is a 2017 release from EGT, a Bulgarian developer that has been expanding its list of slot machines rather quickly. This new game has a theme that is based on the story about Alice in Wonderland, a wonderful tale that has inspired countless children to want an adventure such as hers.
In the case of Wonderheart, the slot machine was designed to offer 5 reels & 20 active paylines. The list of features available here includes the scatters and the free spins, along with the usual wilds. Among the prizes offered, there are fixed ones, but there are also some rather impressive progressive jackpots which are usually found in EGT slots.

The game’s going to give you 1 to 20 lines to activate each round, and for each one there are bets of . The result is a total betting range that appears to use anywhere between .

The slot will have its fixed jackpots to give you, allowing for symbols to form combinations that can pay quite well. For a lot of players though, the focus will probably be more on the progressive jackpots, four of them total and each one associated with a different card suit. This feature is offered in all EGT slots and it typically can reach some incredibly high values.

If you’re more interested in the features of the game, then you’re not going to be terribly happy with what you’re going to find in Wonderheart. It’s not that you don’t get features, it’s only that they’re not very interesting and they mostly mimic those found in other slot machines.

The list of features starts you off with the usual wild symbol, which appears to show an image of a white and a red rose, separated by a lightning bolt. Wild symbols may be used as part of new combinations, acting as the perfect replacements for other symbols that are needed there. The only limitation that is placed on the wild symbol is that it can’t take the place of a scatter. Luckily, that’s not expected of it anyway.

There is a second type of wild symbol, the one that is showing you the image of Alice herself. She is shown as an adult here, not as a little girl, and she’s holding a red rose. Once again, you’re looking at a symbol that will be used as a substitute for others.

Moving on to the scatter symbol, the other major feature that you can expect from a slot machine, you will see in it the image of a large castle. There is the Scatter logo at the bottom, so you will find it easy enough to figure out which one it is. These symbols are required to appear anywhere on the reels, but they are useful to you only if at least three are visible. The game will give you 7 free spins.

Wonderheart’s theme is related to the Alice in Wonderland novel, though I didn’t figure out just going by the title alone. The symbols shown inside are giving you Alice and all the usual companions that are mentioned in the book. There is the Red Queen, the caterpillar, the white rabbit, Humpty Dumpty and others like them. Obviously, there are poker logos as well, and they’re not the pretty kind.

Wonderheart slot review will deliver to the player some decent graphics, but I’m not excited about the features which are offered.