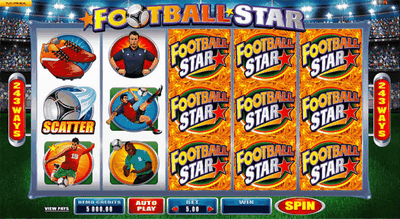 Rules of Top Trumps World Football Stars 2014 slot
The winning combinations can appear on the active line and consist of 2, 3, 4, or 5 identical characters. Before starting the game, you need to set the settings.
Click to change – changes the coin value from 0.
Auto Start – starts the automatic game mode.
Lines – activates from 1 to 15 paylines.
Bet Per Line – makes a bet from 1 to 10 coins on each of the lines.
Bet Max – activates the maximum bet.
Gamble – starts a risk game.
Spin – starts the spinning in the manual mode.

A risk game can be launched after a winning combination appears. In the game, the player can bet the entire amount received for the previous round or only half of it. During the game, 5 cards appear on the screen. One of them is open and the other 4 are turned upside down. You only need to select one of the four cards. If its value is higher than the one of the dealer’s card, you will win.

The photo of Cristiano Ronaldo is a wild symbol. In the winning combinations, it can replace any icons except for the scatter and the golden ball.

The card symbols bring the lowest payouts and have the multipliers from 5 to 150. The logo of the slot is a scatter that multiplies the total bet by 1, 4, 20, or 100.

When the golden ball symbol appears on the 1st and the 5th reel, the Hall of Fame prize game begins. On the screen, there are 16 portraits of players. You will need to choose 3 of them. For each choice, prize payouts will be credited.

The theoretical percentage of the return is 94. The winnings can be increased in a risk game. The more lines are active, the higher the probability of getting a winning combination.