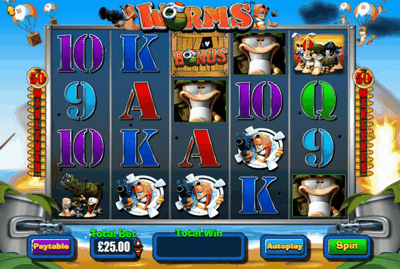 The legendary Worms mobile slot back but this time in 5-reel 50-line video slot machine! The Worms was a series of artillery strategy computer games developed by Team17 in Britain beginning in 1995 and was an instant hit. The squiggly slimy beings may look innocent but when don’t get in their war path because they’ll do some big damage!

Created by Blueprint Gaming, Worms features the same grenade launching characters you may already be familiar with. The slot is very cartoonish and colorful with a bevvy of features.

Multi-level Worms Bonus – The slot offers a multi level Worms Bonus feature that can be activated by landing three of the crate bonus scatter symbols on reels 2, 3 and 4. Once in the Bonus Round you will have to choose a bonus crate and this will give you access to one of the two bonus features. Revealing the Angry Scot Worm gives you access to the Crate Escape Bonus game which is a classic “pick me” style feature. Reveal the space worm and you’ll be taken to the Space Trail Bonus game where you will have to choose a toolbox with the aim to advance your worm further along the space trail.

Super Stacked Wilds – Watch for the symbol where a smaller worm is holding up a larger worm from behind with the word “WILD” scrolled across it. This is the Super Stacked WIld and getting this will expand the wild to cover the entire reel. Also, getting 3, 4 or 5 of these on the screen will win you 2, 8 or 40 respectively and getting the entire filled wins a top prize of 2,000!