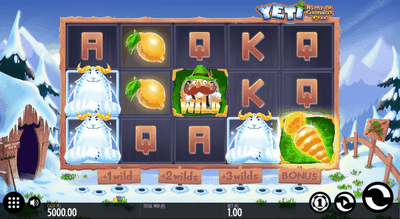 Thunderkick can so often be relied upon for a slot game title that is insanely specific. Most companies might think it was enough to centre their slot around the abominable snowman, or even around the idea of a yeti battle. Only Thunderkick would get so specific as to name the site of the battle and build their design and world around this.

The result is a slot with real character. We are never given the full story, but it is clear someone at Thunderkick has spent their weekends detailing all the characters and cultures we see in this strange slot.

The green hats of Greenhat Peak appear to be classic Germanic mountaineers complete with lederhosen, buckled hats and comically large moustaches. They are drawn with icicle sharp wit along with their enemies who are among the most adorable yetis in popular culture.

Accompanying these characters are a bright soundtrack and well chosen sound effects and the animations are subtle but effective, underlining each spin and giving the visuals a feel of real weight.

Overall, the front end design is some of Thunderkick’s strongest work.

The gameplay, on the other hand, is more or less the same thing you would expect if you opened a slot machine at random – five reels, three rows, eleven win lines and a free spin bonus game.

Very little time was spent blueprinting the back end on this one, perhaps the designers were anxious to hit the ski slopes.

The Scatter symbol does not pay out if you hit a combination with it. However, hitting two on one spin will give you a Wild Attack feature. This triggers either a respin with all non-winning Wild symbols stuck in place, or the Free Spin bonus with ten free spins.

Hitting three or more Scatter symbols will automatically trigger the Free Spin bonus with ten spins for three symbols and an additional five spins for each extra symbol.

During the free spins, the Scatter symbol changes role. When you hit a Scatter during a free spin, it moves a counter by one. Every three Scatters on the counter add two spins to the player’s total and an extra sticky Wild to the reels.

This looks alright, and is close to our yardstick for average of roughly 96%.

The volatility of this game is low to medium, making it pretty much useless to pair with our preferred slot machine strategies.

Yeti Battle of Greenhat peak has one of the more charming stories to tell in the world of slots, but its low volatility means it is counted out as a useful slot for those following our slot strategies, and its average return to player means it is not selling itself very strongly to other players.

f neither of those caveats don’t ward you off, you might enjoy this game for the light hearted atmosphere.