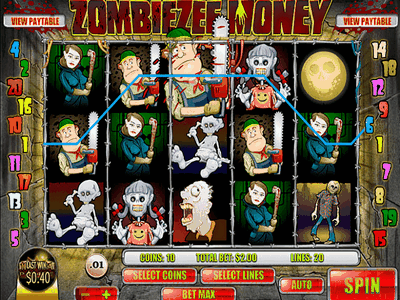 Before the Zombie Apocalypse – Set up and Play
If you are familiar with Rival Gaming slots, then you will probably recognize the 20 lines setup with the features happening within the free spins game. You can select any number of lines, though the expanding wilds are at their best when you stick to the full 20. You can play up to 10 coins per line. Those coin values can vary between 1c and 25c, making the minimum / maximum spin cost for 20c / .

Next comes the main zombie (the open mouthed headshot with the mustard colour). This is worth 500 coins for 5 with the green standing zombie following up with a 300 coin prize. There are plenty of smaller wins from this game, headed by the flamethrower guy and zombie nurse.

Three scatter symbols can be found (the 2 bonus ones during the free spins game). These have prizes which are multiples of your total bet, as well as triggering the corresponding bonus. Radiation signs trigger the free spins with 3+ on the screen. These are not tied to win-lines, so only the total number visible counts. The other scatters are the brain (which triggers the boneyard bonus) and the vault (which triggers the bunker bonus).

Dawn of the Dead?

However many of the radiation symbols you hit, you will get 10 free spins. These are the same as the main game, except that you will get a 2x multiplier for any wins which involve the wilds. Once you hit the free spins, you’ll be able to unlock the 2 break out bonus games.

The bunker bonus starts with a big zombie in the middle of the screen and 2 rows of metal vaults on either side. This zombie then gets shot though the middle of his forehead – and the game begins from there. You choose vaults, which open up revealing useful items like radios and gas cans. Each has a prize in coins associated with it. After 4 picks, the prizes in the vaults you did not pick are revealed and your total is given.

The boneyard bonus looks completely different, set in a scrap yard for old cars. The pick-em concept is similar enough here. You have a spade, and whack different zombies over the head with it. While this is entertaining enough, the cash prize for each zombie you whack is even better!